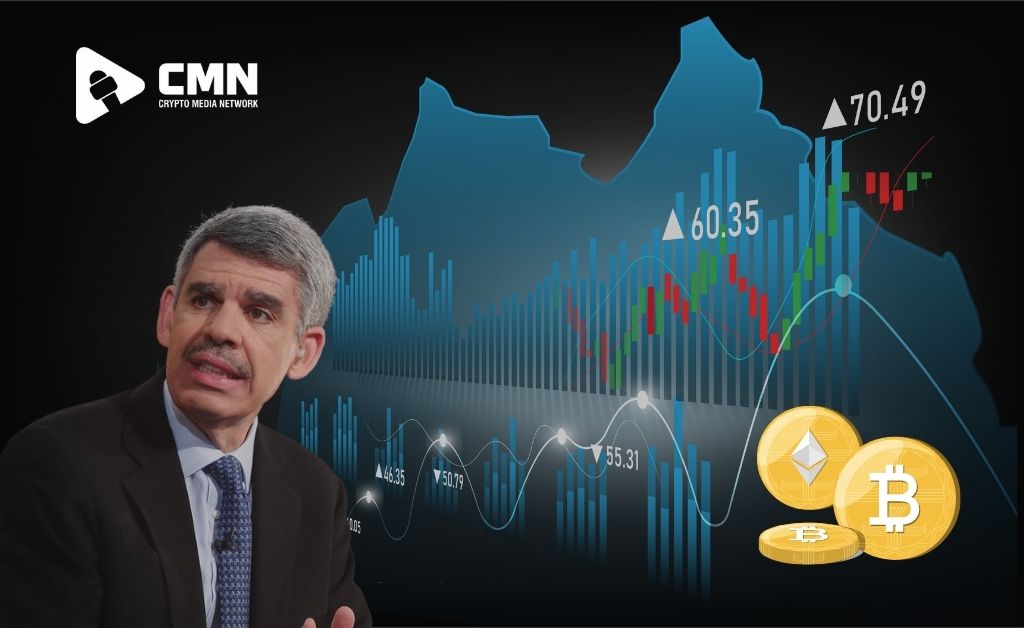 The Federal Reserve’s response to inflation, according to Allianz Chief Economic Advisor Mohamed El-Erian, will force the values of cryptocurrencies, such as bitcoin, to “move higher.” “That’s what you get when you wait too long to notice inflation and take action,” he said.

Economist Mohamed El-Erian examined the US economy, markets, and the Federal Reserve’s approach to inflation.

El-Erian is the president of Cambridge University’s Queens’ College. He was also the CEO and co-chief investment officer of Allianz, the corporate parent of PIMCO, one of the world’s largest investment managers.

I believe the markets have recognized that we are dealing with three concerns. One is that we are experiencing high and persistent inflation. The Fed is significantly behind the curve, and the path to orderly deflation is quite tight.

Companies are now facing growth concerns, according to the economist, as a result of these reasons. He mentioned that Goldman Sachs, an investment bank, released a report on Monday predicting a 35 percent chance of a recession in the next two years. “It’s a significant figure, 35 percent,” El-Erian emphasized.

“So, the key concern is: can we manage this much more difficult inflation growth landscape?” he said, adding that “bank CEOs are apprehensive about the macro situation.”

The Recovery of Worth

Following the weekend selloff in various major cryptocurrencies, including bitcoin, the Allianz top economic advisor was asked about the long-term forecast for the crypto sector.

“I think the issue for the crypto community is that this loss is occurring at a time when gold is rising and approaching $2,000,” he said. “Because one of the most compelling arguments for cryptocurrency is that it is a diversifier.” It’s appealing at a time when inflation is high. And crypto hasn’t performed that role previously.”

“There’s a reason for that, and it’s because crypto, unlike gold, gained massively from all the liquidity injections,” the economist stated. So, in crypto, there’s a tug of war between the understanding that the system as a whole is losing liquidity and its attraction as a diversifier. So far, it’s the liquidity factor that has prevailed.”

He went on to say:

You’re witnessing a restoration of value across the board, which is a wonderful thing. It’s in equities, bonds, and crypto, to name a few examples.

“We’re simply adjusting to a new paradigm in which liquidity is no longer copious and unpredictable,” he continued.

“So I regard this as part of the value restoration that we are seeing in quite a few assets, not all of them now, but quite a few already,” El-Erian continued.

The Federal Reserve’s Inflation Target and the Cryptocurrency Market

El-Erian was also questioned on what might cause the Federal Reserve to adjust its inflation target, as well as what that target might be.

“The understanding that by being so late, they won’t be able to get to their target and their credibility would be jeopardized will drive them to modify their target,” he responded. “They are also concerned that by slamming on the brakes too hard, they would send the economy into a longer-term recession rather than a short-term one.” “They will be enticed, and many people will pressure them to boost the aim from 2% to 3% as a way out,” he continued. Now, that’s not going to be a simple solution, and it’s going to be really divisive.”

“That’s what happens when you wait too long to notice inflation and take action,” El-Erian said. We should have begun QT the previous year, but we did not. And now we’re experiencing the results of the Fed’s tardiness.”

Both of them progress upwards.