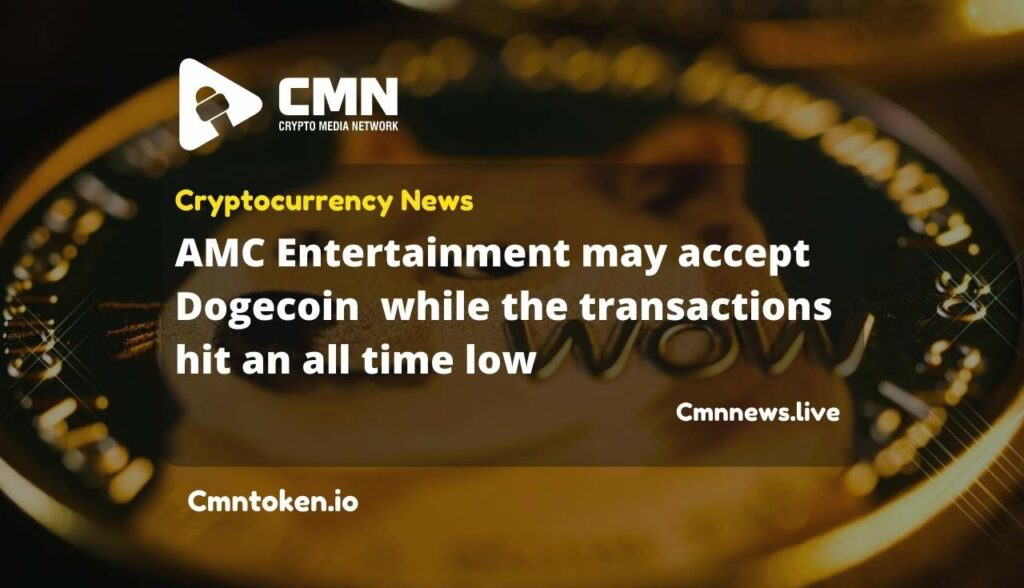 AMC accepts dogecoin? A rise of 6.32% in the global cryptocurrency market cap to $1.97 trillion was mirrored in Wednesday’s early morning price movement for Dogecoin.

A Cointrendz data analysis shows moderate interest in DOGE on Twitter at the time of publication, with 911 mentions. Among the top three cryptocurrencies mentioned in tweets were BTC, ETH, and Solana.

Earlier this week, the  Fed said it may begin to taper monthly asset purchases soon as the target fed funds rate range remained the same. A shift away from ultra-loose monetary policy may impact volatile assets in the future, such as cryptocurrency.

The CEO of Tesla stated that a lower transaction fee would allow the meme cryptocurrency to be used in everyday transactions such as buying movie tickets.

AMC Entertainment Holdings Inc. conducted a poll that led to Musk’s comments, According to Aaron, the poll garnered a resounding response. DOGE was approved by two-thirds of the respondents that resulted into the assumption that AMC accepts DogeCoin.

As the buzz around Robinhood Markets Inc. HOOD and its upcoming DOGE wallets grow, Tyler Winklevoss, the co-founder and CEO of Gemini too attracted attention by tweeting “Dogecoin To The Moon.”

Earlier Winklevoss had said in May that DOGE was the “people’s money” and said that Geminin will provide both trading and custody support for the coin.

Dogecoin was developed using the technology that was used to build Bitcoin. Technically, unlike altcoins such as Ethereum, Dogecoin isn’t very different from Bitcoin. However, it does exhibit minor changes in its proof-of-work hashing algorithm and total supply.

As compared to Bitcoin, it has a shorter block time, an extravagant supply, and very low transaction fees (1 DOGE for every 1000 bytes of transaction size).

Dogecoin’s shorter block time means it can quickly create new blocks. For it, the block time is one minute. That’s fairly short as compared to Bitcoin’s 10 minutes. Its blocks payout 10,000 DOGE per block.

AMC Accepts dogecoin, But does the Tech and Statistics support that?

How many transactions other chain process?

Most of these chains aren’t that far from their ATH when it comes to transactions. 2013 was the year of the DOGE ATH. 8 years ago. Since then, it has had 8 pumps and 7 dumps. Right now, we’re in the middle of the eighth dump. It is a fork of a Litecoin fork from 2013, and it hasn’t improved much since then. Payments cannot be performed globally through it because of its throughput limitations.

Dogecoin (DOGE) is based on the popular “doge” Internet meme and features a Shiba Inu on its logo. The open-source digital currency was created by Billy Markus from Portland, Oregon and Jackson Palmer from Sydney, Australia, and was forked from Litecoin in December 2013. Dogecoin’s creators envisaged it as a fun, light-hearted cryptocurrency that would have greater appeal beyond the core Bitcoin audience, since it was based on a dog meme. Tesla CEO Elon Musk posted several tweets on social media that Dogecoin is his favorite coin.

Dogecoin differs from Bitcoin’s proof-of-work protocol in several ways, one of which is by using Scrypt technology. The altcoin has also a block time of 1 minute, and the total supply is uncapped, which means that there is no limit to the number of Dogecoin that can be mined. You can mine Dogecoin either solo, or by joining a mining pool. A Doge miner can mine the digital currency on Windows, Mac or Linux, and with a GPU. As of 2014, you can also mine Litecoin in the same process of mining Dogecoin, as the processes were merged.