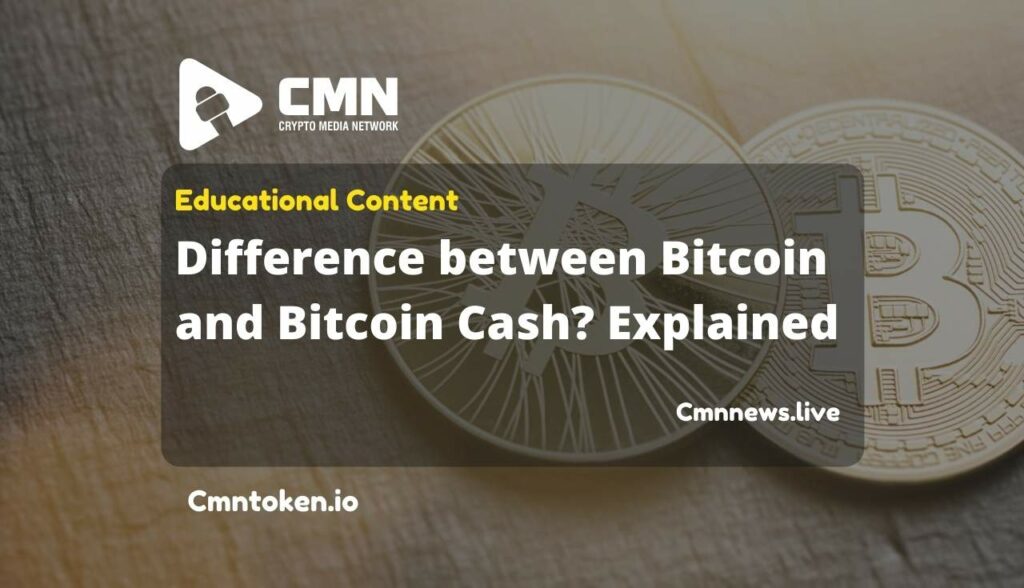 Several concerns existed regarding the possible future of Bitcoin (BTC). Therefore, Bitcoin Cash (BCH) was developed. Despite their similar names, the two cryptocurrencies are entirely distinct.

Recently the adoption of BCH is growing day by day, one of the most important in the recent time being used as a payment method by AMC entertainment.

Comparisons between Bitcoin and Bitcoin Cash must take into account a multitude of factors. We will be comparing and contrasting these two cryptocurrencies in the next section. Let’s examine both cryptocurrencies from an overview perspective.

Bitcoin is the world’s first cryptocurrency. It is based on blockchain technology that prevents counterfeiting and eliminates the need for a trusted third party in financial transactions.

As of Q1 2021, there are over 18.5 million Bitcoins in circulation. The total number that will ever be mined is capped at 21 million. Cryptocurrency experts believe that its scarcity is, and will continue to be, a significant driving factor for Bitcoin’s price — especially once the limit is reached.

Similar to other currencies, one can use Bitcoin to buy and sell products, services, and investments. The way Bitcoin transactions work, however, is unique.

Transactions are broadcast to the network, processed, and verified by Bitcoin miners (who receive a fee to secure the protocol) resulting in the distributed ledger, or blockchain, being updated in the computers (nodes) that store it. These nodes can be owned by anybody, making the blockchain decentralized.

Transactions are submitted and stored in blocks — hence the name blockchain. The block size of Bitcoin is one megabyte, with the block creation time taking on average 10 minutes (There is a system called segregated witness which seeks to create more space in blocks by reducing the data carried by each transaction, but it is not universally employed). The network’s blocksize is one of the main reasons behind Bitcoin’s limited transaction processing capacity (around seven to ten transactions per second) and scalability concerns.

One of Bitcoin’s biggest advantages compared to Bitcoin Cash is its popularity. Being the first-ever cryptocurrency, it is by far the most widely adopted and has the most institutional trust behind it and third-party services supporting it. Bitcoin currently represents just under 41% of the entire industry.

On one hand, this could lead to Bitcoin losing its monopoly as new and more versatile altcoins come to market. But others argue that Bitcoin has already transcended into a store of value as “digital gold.”

2. What is Bitcoin Cash? A hard fork.

Hard forks can be initiated by developers or crypto community members who want to implement more functionalities to the existing blockchain technology. This also requires all the network’s nodes and users to upgrade to the latest version of the software.

As a result of a hard fork, cryptocurrency holders will be automatically granted tokens in the new fork. For instance, if you held 10 Bitcoins before the Bitcoin Cash hard fork in 2017, you would have gotten the equivalent of your holdings in 10 BCH after the fork.

To date, Bitcoin has undergone numerous hard forks, resulting in projects like Bitcoin XT, Bitcoin Classic, and Bitcoin Gold — to name some of the most popular. Yet, Bitcoin Cash is undoubtedly one of Bitcoin’s most successful hard forks.

ALSO READ : What is Crypto Mining? and how does it work

3. What is the difference between Bitcoin and Bitcoin Cash?

Bitcoin Cash was created from the same code base as Bitcoin. The hard fork resulted in a currency that shares numerous technical characteristics with Bitcoin.

First, both cryptocurrencies utilize a proof-of-work consensus mechanism. This means that as miners do the work of mining new blocks, transactions are confirmed on the blockchain and the miners are rewarded with new coins.

Overall Bitcoin Cash is cheaper and faster than Bitcoin, enabling more people to execute transactions on the blockchain at the same time. The average BCH transaction costs around US$0.03, while BTC transactions cost around US$20. BTC fees reached as high as US$60 in April.

Thanks to its optimized network, Bitcoin Cash is also cheaper to trade and move around within cryptocurrency exchanges.

On the downside, Bitcoin Cash has fewer trading pairs and lower liquidity — making it less tradable. BCH’s intraday volume is also indicative of a lower demand, measuring US$14.3 billion, compared to BTC’s US$71.9 billion at time of publication.