Do we see an end to unregulated exchanges in Crypto? 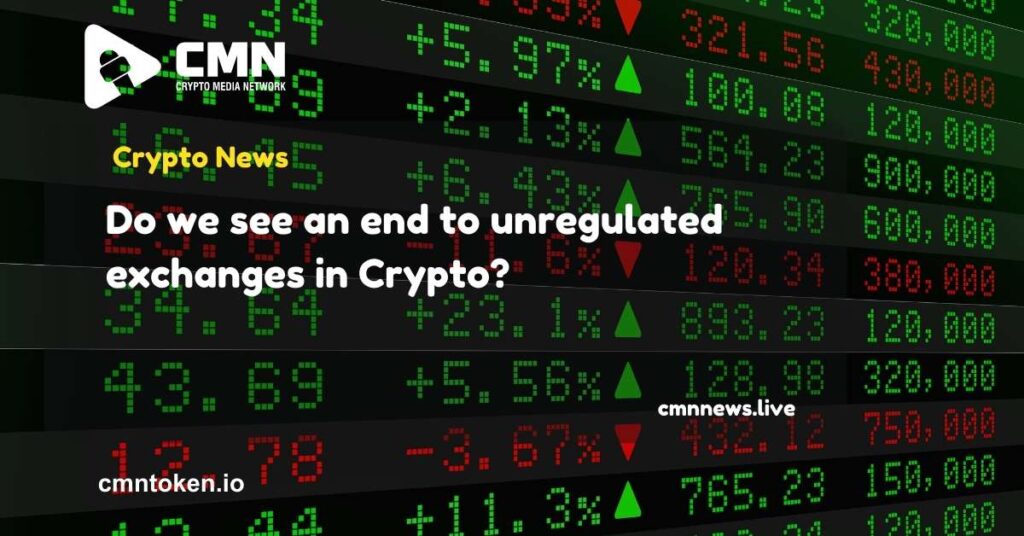 Do we see an end to unregulated exchanges in Crypto?

Since 2013, the exchange development has not been regulated by authorities ,which means that we’ve been trading with unregulated exchanges , and it is also challenging to deal with exchange cases. It is almost impossible to determine who is responsible.

There are many signs that suggest this phenomenon may soon change, and that the unregulated exchanges era may be coming to an end!

Also read: Cryptocurrency media projects that you should be looking at right now.

First, let’s have a look at Binance, a very popular unregulated exchanges

On June 25 2021, the Financial Services Agency of Japan issued a warning to Binance Holdings Ltd., stating that its exchange, Binance, had provided relevant services to Japanese residents through the Internet without obtaining a license for the Japanese digital currency trading industry.

While Binance has suffered a tragedy in Japan, the local exchange, CoinCheck, has been pleasantly surprised to return to the top after a warning. At present, there are about 30 licensed exchanges in Japan. Unless the company obtains a corresponding license in the future, it may be difficult to gain a foothold in Japan.

On the same day, the British FCA stated that “Binance Markets Limited is not allowed to carry out any regulated activities in the UK“. According to reports, Binance Markets Limited is the holding company of Binance in the UK. Meanwhile, the day before, Binance also stated that it no longer provides operations for users in Ontario, Canada, which has a 15 million population. According to news on the 18th, Ontario has become a “restricted jurisdiction”. Besides Binance, the Ontario Securities Commission (OSC) also took action with Kucoin and the parent company of Poloniex.

Studying what happened on Binance, we will repeatedly see two words, “regulation” and “license.” It will be difficult to develop digital currencies in some countries that have issued digital currency licenses. On the other hand, those with unclear supervision but strictly controlled will also be at a disadvantage in the original regulatory system.

In recent months, Huobi has made withdrawals available for a limited period and with a limited amount to all users. Huobi users have speculated that the 0TC channel may close completely in the future as a result of this move. 0TC was slowing down, first canceling the bulk, then T+1. It seems reasonable to assume that it will then switch to T+5, slowly release the pressure of 0TC, and shut down at the end.

Looking at South Korean unregulated exchanges, the revised “Specific Financial Transaction Information Reporting and Use Law” requires cryptocurrency exchanges to submit documents before September 24 to prove that they have real-name verified accounts issued by banks. In other words, it is to utilize the regulated banking system to supervise cryptocurrency. Several South Korean cryptocurrency exchanges do not comply with the requirements, except for the four most prominent ones. Therefore, there is also somewhat a sense of removing small exchanges from the market.

These indications show that a regulatory wave against cryptocurrency unregulated exchanges may soon be approaching, and the previous era of unregulated exchanges is also about to pass. For the currency circle, this may also be an opportunity. When the cryptocurrency exchange can be supervised, it will also be a layer of protection for users of the transaction. It will significantly reduce the possibility for exchanges to run away with all the funds.

When trading, choose an exchange that is well-known and highly ranked. If you have gained too much money, your money may not be available for withdrawal when the supervision strikes.

Share. Facebook Twitter Pinterest LinkedIn Tumblr Telegram Email
Previous ArticleCryptocurrency media projects that you should be looking at right now
Next Article Bitcoin payments can now be made on Shop.com after a partnership with BitPay