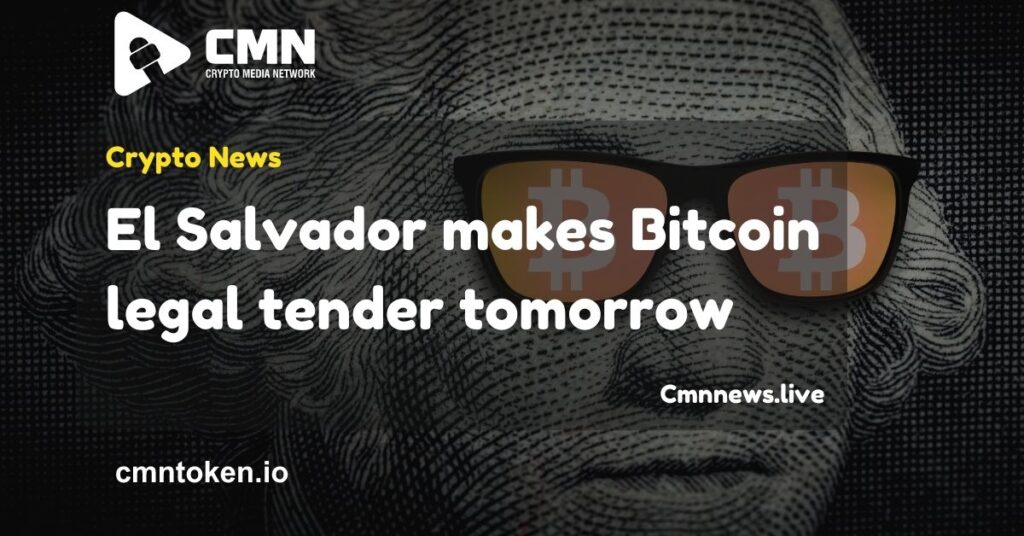 El Salvador makes history tomorrow by becoming the first country in the world to make Bitcoin an official legal tender. Now, Bitcoin and its adoption will begin a major new experiment. There’s no doubt that there are major risks attached to the decision made by the young maverick president, Nayib Bukele. Gladstein cited political moves by Bukele’s government among other problems, which make Bitcoin adoption an interesting chapter in the country’s history. (El Salvador population is 6,486,205)

Meanwhile, the country has begun installing ATMs to allow BTC-USD conversions. The government has also created a fund worth $150 million to back such conversions. Currently, outside of the U.S. and its territories, there are seven other sovereign nations that use the U.S. dollar. It is making history with a bold jump into the future of money – which is, inevitably, digital – by officially recognizing Bitcoin as legal tender together with the U.S. dollar.

The crypto market has seen a surge in interest owing to a fresh wave of bullishness after the US jobs growth report was released Friday. Fed has been buying treasuries worth $120 billion a month since the coronavirus outbreak. There is a possibility that the country could run out of dollars. The risks prompted some citizens last week to take to the streets to protest against the adoption of Bitcoin as an official currency.

However, The Bitcoin move could be cautiously optimistic. To make transactions, the country relies on the U.S. dollar, a major first-world currency. These reliances on another country’s currency also incur a number of costs. The government cannot print its own money and the economy cannot benefit from the U.S. Federal Reserve’s money-printing agenda. As a result, it must either borrow or earn the dollars it needs. A stronger U.S. dollar can have a crippling impact on emerging-market economies, such as that of El Salvador.

You May Also Read: Bitcoin will be Pass $100k By Year-End: Chainalysis CEO

Once these countries adopt a cryptocurrency as legal tender, they’ll have a currency that isn’t influenced by market conditions within their own economies and doesn’t depend on the economy of just one country. Bitcoin operates on a global scale and is, as such, largely impacted by wider, global economic changes.

As a result, if the adoption proves a success, it will be a big step toward mass adoption of Bitcoin by other countries. Other nations, including Panama, Guatemala, and Honduras, that are similarly reliant on remittances, could also adopt Bitcoin if the process in El Salvador runs smoothly and economic growth, stability, and levels of financial inclusion are increased as a result.