Gas Fees: It is important to clear up an incorrect perception of Ethereum 2.0 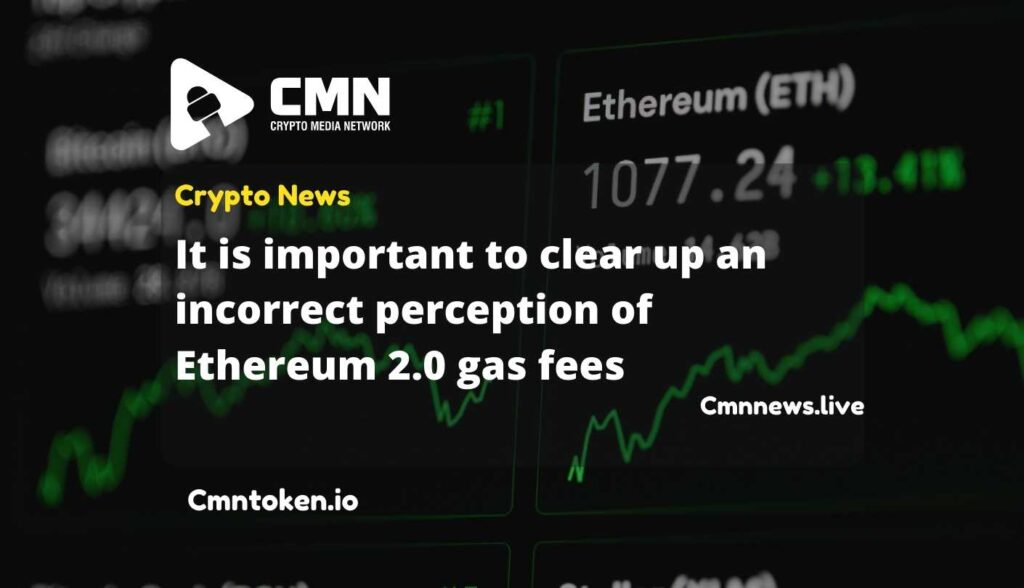 It is important to clear up an incorrect perception of Ethereum 2.0

Gas fees is essential to the Ethereum network. It is the fuel that allows it to operate, in the same way that a car needs gasoline to run.

Ethereum 2.0, also known as Serenity or ETH 2.0, is a significant upgrade to Ethereum. With this project Ethereum’s capacity for transactions will be increased, fees will be reduced, and the network will be more sustainable. Ethereum will achieve this by changing its consensus mechanism from proof-of-work (PoW) to proof-of-stake (PoS).

The upgrade to Ethereum has been happening in phases. Phase 0, which is already live, is the first phase. A beacon chain is a component of Phase 0.

Phase 1, or the merge, represents the second phase. In other words, the “merge” represents the official transition to the PoS consensus model, in which the current Ethereum network will merge with the new beacon chain.

The third phase, “phase 2,” actually implements sharding, so that Ethereum scales and can support higher transaction volumes. The merging of the systems is expected to result in shard chains in 2022.

The most attractive thing about the Ethereum 2.0 which is making a lot of crypto enthusiasts interested in the update is its reduction of  gas fees.

Gas fees will be significantly reduced through sharding when it is released in 2022 . In each major update, the subject matter is entirely different.

Proof of Stake will migrate the blockchain over to their Proof of Stake beacon chain, thus converting the consensus algorithm from Proof of Work to Proof of Stake. Gas fees won’t be affected significantly, since every block is still confirmed by all nodes.

The sharding upgrade, scheduled for 2022, will significantly reduce gas fees because it will split the network up and allow a group of nodes (or shards) to process transactions simultaneously. Gas fees should be reduced by around 100x as a result of this. The arrival of this may not be until 2023.

Meanwhile, how is it going?

Hopefully fees will decrease as layer 2 solutions become available, but at the moment the network is being overloaded with so many users that any reduction in fees will quickly be cancelled out by the added users.

Due to this, competitors like Tezos, Algorand, BSC, and Cardano have been able to step up to pick up the slack.

Will ETH be able to resolve its gas fee problems before a more efficient competitor gains market share? There is no way to know for sure, but the recent massive pumps of ADA, SOL, ALGO, and XTZ suggest people are trying to hedge their bets.