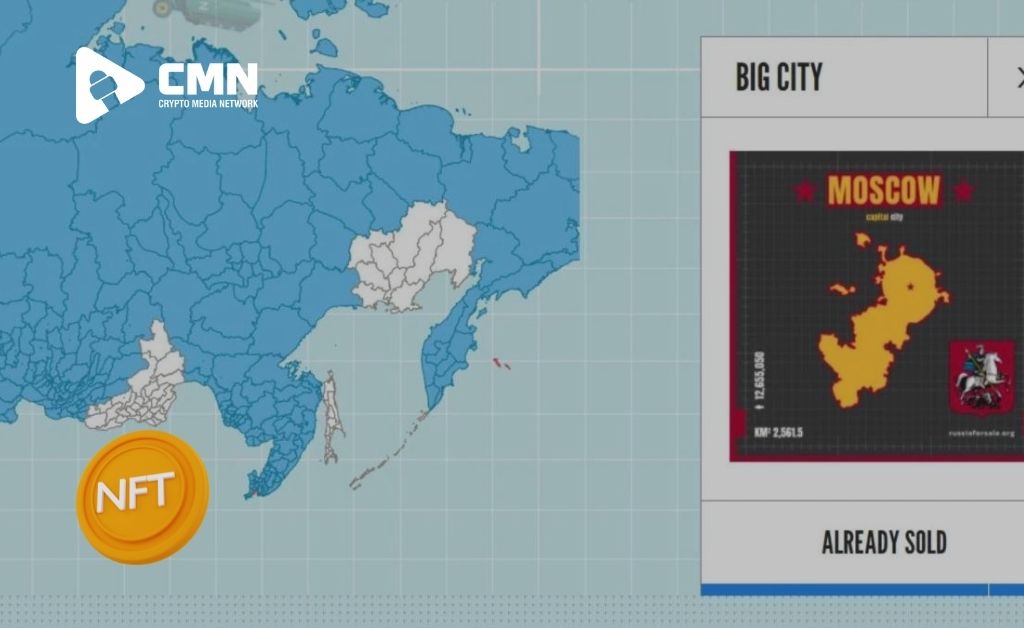 In the guise of NFTs, a tech innovation corporation located in Georgia’s capital Tbilisi is currently “selling Russia piece by piece.” The proceeds from the artifacts, which represent about 2,500 Russian districts, will go toward helping Ukraine rebuild after the Russian army took over the country two months ago.

Leavingstone, a Georgian digital creative business, has joined fundraising efforts for Ukraine, which has been defending itself against Russian military assault for the past eight weeks. Non-fungible tokens (NFTs) representing areas of Russian territory are now being sold by the corporation.

Leavingstone is auctioning off 2,443 areas of the Russian Federation portrayed on playing cards with names, sizes, and a “weirdly real coat of arms” in the first of three planned phases of the ‘Russia for Sale’ initiative. An interactive map displays the properties to potential buyers, and 34 have already been sold, totaling nearly $19,000 in ether.

“We recognized a lot of potential in it,” Leavingstone co-founder Levan Lefsveridze told Radio Free Europe’s Georgian service. “The majority of people would want to be involved in Russia’s partition,” he added, clearly trolling Russian President Vladimir Putin and his government, who have promised to punish anyone who advocates for Russia’s territorial integrity to be violated.

The Georgian agency will sell NFTs of Russian monuments such as the Kremlin, Moscow’s Ostankino TV Tower, Putin’s winter house and home, a property valued close to $1 billion, and a bunker during the next part of the sale. “If you appreciate Khrushchyovka architecture’s post-soviet look, you’ll like it,” the organizers tease investors.

They predict that the third sale will be a huge one. “We’re going to auction Lenin himself.” Yep. The project’s website promises, “Stuffed Granddaddy of the Red Revolution will be up for sale!” Its promoters highlight that all money will go toward aiding Ukraine.

The Ministry of Digital Transformation in Kyiv is the major beneficiary, and all payments will be sent to its wallet. The department has been in charge of Ukraine’s defense in cyberspace, another front in the fight with Russia, among other things.

Also Read: Despite the Violence, NFT Projects are indeed Attempting to Restore Ukraine

Eight years after annexing Crimea and providing backing to pro-Russian separatists in the Donbas region, Russia invaded Ukraine. Georgia has also experienced issues with the same neighbor. In 1992, Russia backed rebels in Abkhazia and subsequently blocked the Georgian government from retaking the territory of South Ossetia, another separatist country.