Bitcoin Value: How is it Determined? BTC price forecast 2021 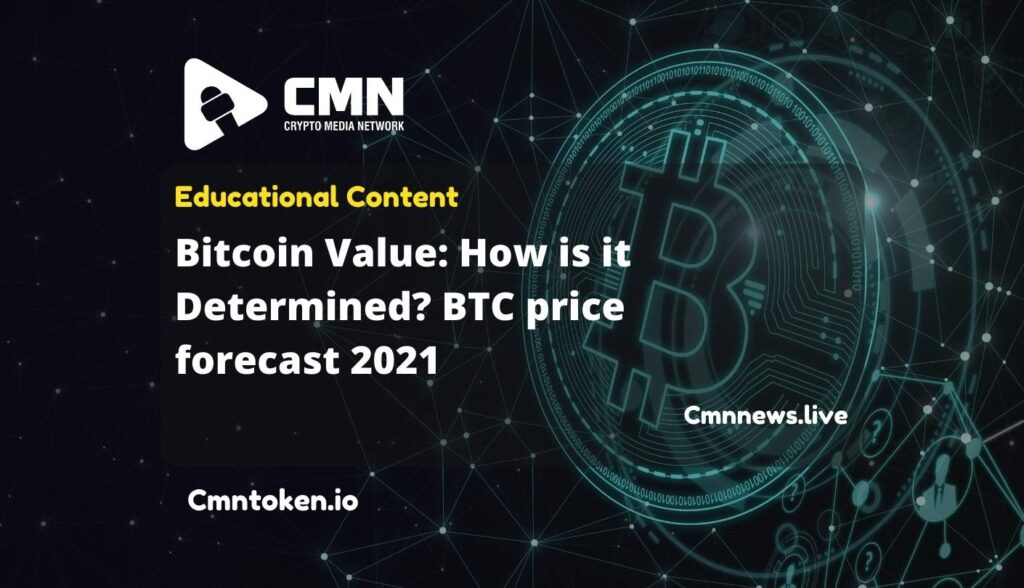 Bitcoin Value: How is it Determined? BTC price forecast 2021 - CMN

Skeptics have questioned Bitcoin Value fluctuation and strived to rationalize its valuation based on its mathematical and economic basis.

The decentralized nature of Bitcoin means that it does not follow government monetary policy, and it isn’t backed by a government or underlying asset. This creates skepticism among investors and consumers who value the price stability signals fiat currencies enjoy as a result of government policies and support.

Supply and Demand for Bitcoin

On the supply side, Bitcoin is a unique asset in that its new supply schedule is absolutely inelastic; it is completely immune to fluctuations in demand. When most goods, including fiat currency and gold, experience a rise in demand, producers react by increasing production and returning prices to an equilibrium. When demand for bitcoin rises, thanks to the difficulty adjustment, production of new bitcoin does not rise, hence the rise in bitcoin value.

Effect of news on Bitcoin Value

One of the reasons why cryptocurrencies are so sensitive to good or bad news is because, unlike traditional currencies, they are not regulated by any authority. Therefore, any popular sentiment or point of view created due to positive or negative news directly affects their value.

Since cryptocurrencies are usually mass-managed by people working in all parts of the globe in real-time, popularity and impression play great roles in increasing or decreasing their value. Here are some possible coincidences that make this theory a palpable fact.

2017 was probably the most exciting and adrenaline-evoking year for people invested in the world’s most popular cryptocurrency, Bitcoin.

Therefore, it is very important to beware of where you are getting your crypto news from. The following sources provide reliable information about news and fundamentals:

As money supply or velocity increases, prices rise and currency value declines. Inflation is a result when currency value decreases. Bitcoin’s finite supply makes it deflationary. Because bitcoin is limited, it is safe from hyperinflation. Governments’ ability to print an unlimited amount of currency has led to periods of hyperinflation during which many fiat currencies have lost value.

The concern over deflationary spirals is unfounded or unsupported by economists; supply and demand have always been able to correct deflationary events in bitcoin and fiat currency. Furthermore, Bitcoin’s finite supply makes it an extremely secure long-term store of value, comparable and in some cases even more advantageous than gold.