Russia gets a Pro crypto stance , President Putin says it has right to exist. 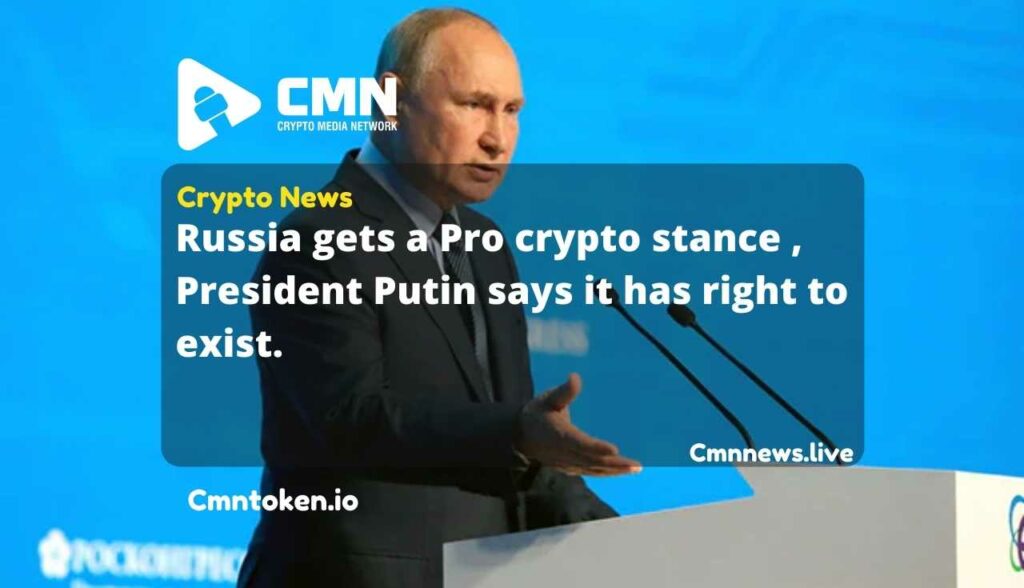 Russia gets a Pro crypto stance , President Putin says it has right to exist.

On the sidelines of the Russian Energy Week international forum in Moscow, Russian President Vladimir Putin discussed the potential of cryptocurrency.

In terms of its land area, Russia is the largest country in the world. In terms of its area, Russia is larger than Kazakhstan, Mongolia, and China. Despite the fact that it is a land mass with a larger area than China, Russia has a smaller population – although it remains one of the world’s most populous nations. The Russian Federation is the official name of the country. The ruble is the country’s currency.

Also read: Which Crypto and Blockchain Conferences are happening in CED Dubai 2021

In Russia, cryptocurrency is still in the developing stage, as the country evaluates its regulatory approach to various aspects of this asset class. Despite the country’s regulatory climate, Bitcoin and other crypto assets are not acceptable forms of payment in Russia. People in certain government positions are also prohibited from owning cryptocurrency.

“Cryptocurrencies have a right to exist and can be used for settlements,” said Vladimir Putin.

Russia gets a Pro crypto stance

While USA and China have been seen sus on crypto, Russian president Vladmir putin seems to have pro Crypto stance
Vladimir Putin said:

“To transfer funds from one place to another – yes, but to trade, especially to trade in energy resources, I believe is premature.”

Cryptocurrencies do not have a backing and are unstable, according to the head of state. Because of this, it is premature to consider them as a settlement instrument when trading oil, primary materials, or energy sources.

Our attention will be focused on the development trend of cryptocurrency, which may also become a means of saving at some point. Market fluctuations have been observed, but it is still early.

Meanwhile, he reiterated that cryptocurrencies are developing and “have a right to exist.”

Deputy Finance Minister Alexei Moiseev of Russia stated earlier that cryptocurrencies will not be accepted as means of payment in Russia for the foreseeable future, but Russia has no plans to ban the purchase and ownership of such assets.