With $ 75 billion, solana passes Tether as the fourth-most valuable cryptocurrency 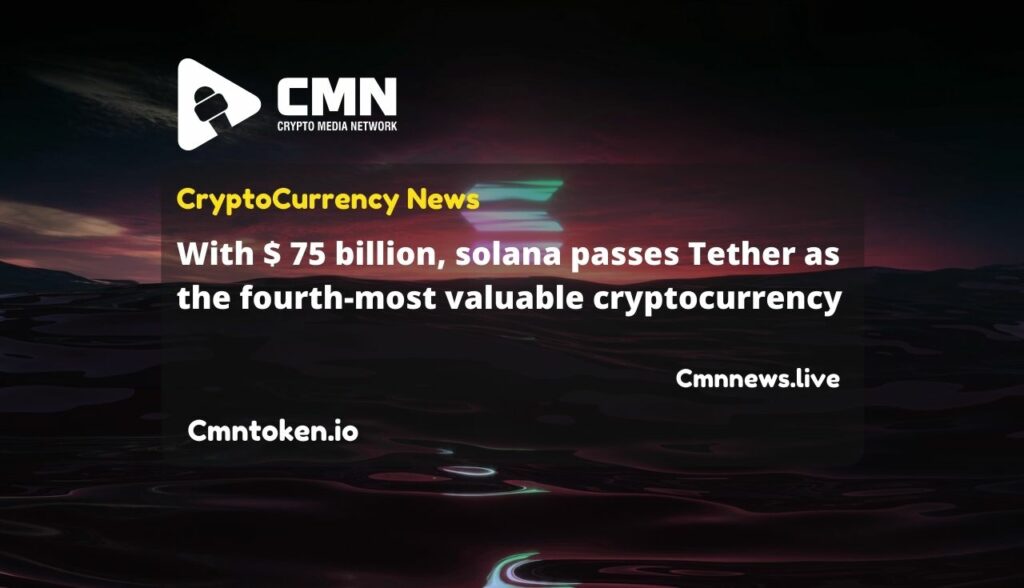 According to Coinmarketcap, Solana cryptocurrency, also known as the “Ethereum killer,” has overtaken Tether, the biggest stable coin provider in terms of global market capitalization, surpassing its rival.

One of several competing blockchain projects such as Ethereum, Zilliqa, and Cardano, Solana is aimed at developing an ecosystem of products and services powered by cryptocurrencies.

With Solana, developers can then write and launch customized applications in multiple programming languages using flexible infrastructure that offers faster transaction settlement times. This feature is achieved by using the native cryptocurrency of the Solana network, SOL, to execute custom programs, send transactions, and reward actors supporting the network.

In previous years, the NFT industry and decentralized applications have risen in value, which increases the value of Solana. In terms of total market capitalization, SOL is the second-largest network for NFT art, with an estimated $1 billion in capitalization.

SOL prices rose along with the market-wide rally in crypto prices, which was also seen in other cryptocurrencies. As its venture capital arm entered Web 3.0 gaming development, the so-called Ethereum killer also received additional positive signals.

A consortium of investors led by Lightspeed Venture Partners and Solana Ventures announced last week that they will invest $100 million in the development of a Web 3 gaming platform. Developers of desktop and mobile games will be drawn to its public blockchain for building their projects. Early in the year, the price of SOL had risen almost 17,500%, from $1.51 to $262.45.

NFT, along with the decentralized finance industry, adds an additional $15 billion to SOL’s valuation, which, when combined with NFT, generates almost 20% of the project’s funding.

An alternative to the huge fees incurred by ETH networks, the project is referred to as an “Ethereum killer.” Besides relatively low fees, SOL can process 65,000 transactions per second.