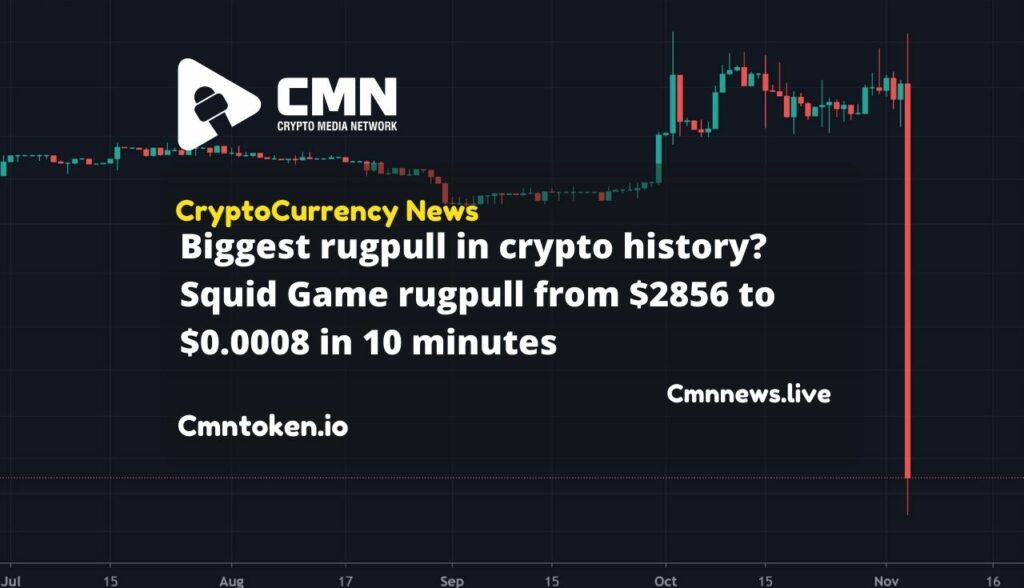 Squid game was a play-to-earn token inspired by the hit Netflix show Squid Game had experienced a sussy rise since launching earlier this week.

You can check further transaction details from : BSC scan of squid game

It appears that the anonymous hucksters behind the Squid Game cryptocurrency have officially rugpulled the project, making off with an estimated $2.1 million.

About the squid game rugpull

SQUID peaked around 2,861 USD before plummeting to $0 USD around 5:40 AM Eastern Time. Investors commonly refer to this type of theft as a “rug pull,” which occurs when the creators of a cryptocurrency immediately cash out their coins for real money, draining the exchange of liquidity.

Despite being launched just last week, the SQUID crypto coin includes plenty of red flags, including a three-week-old website with grammatical and spelling errors. SquidGame.cash, the website hosted by the scammers, has vanished, along with all other social media accounts. A copy of the website can be found here.

SQUID’s Telegram channel, set up by unknown scammers, did not allow comments from outsiders, which was another red flag. The Twitter account also prevented comments from being posted.

But the biggest red flag was that no one who purchased the coin was able to sell it. Users reported how they weren’t able to sell it on pancake swap.
If you want to know how to recognize a scam coin without technical knowledge, please refer this
Scammers have used pop culture to get media attention for years. An example of a rug-pull occurred earlier this year with Mando, a cryptocurrency that used images from Disney+’s Mandalorian TV show without permission from Disney. (The Indian bolly NFT project however seems different)

Does this mean that investors have finally learned their lesson and won’t invest in shady cryptocurrency projects anymore? That seems unlikely.

Please don’t be looking for a “buy the dip” opportunity here.
People who invested for quick money into this project,didn’t properly learn from the show much. Everyone died, and one person got rich, well seems like the show was right