USDT vs USDC: Which one is the better stable coin? 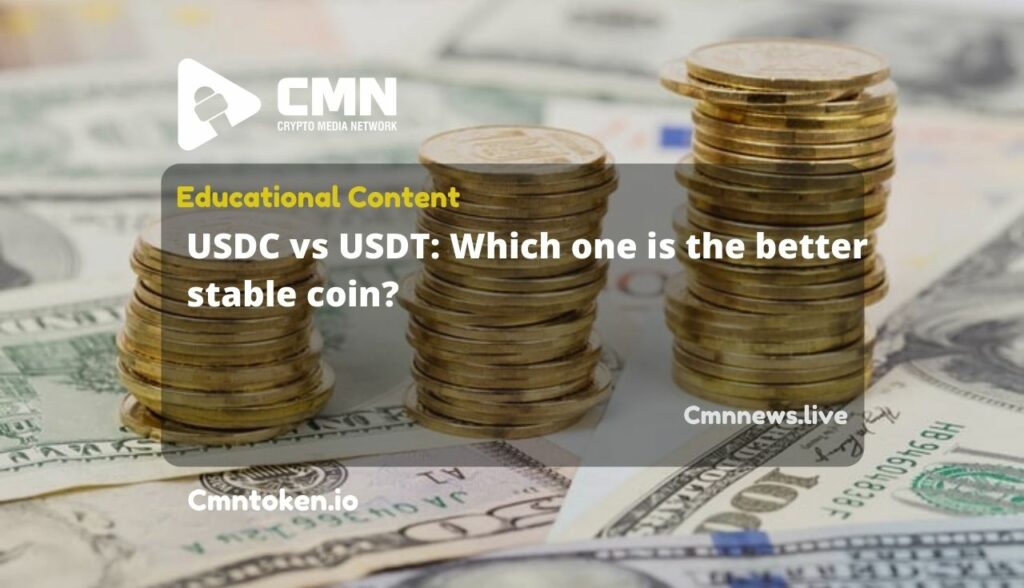 USDT vs USDC: Which one is the better stable coin?

USDT vs USDC
USDT is a convenient currency to use for trading and payments. By moving between crypto-assets and fiat currencies, traders can secure their positions and stay in the crypto market. The USDC is also used for trading, but USDT has a higher volume and liquidity, allowing for more transfers between crypto-assets and the stablecoin. Due to USDT’s ability to transfer on a broader range of blockchains, traders may find it more attractive to choose USDT over USDC, depending on the trading pair.

Center Consortium’s USDC is often referred to as a safe and trustworthy stablecoin due to its compliance with regulation and its full cash back-up. USDT, on the other hand, remains uncertain in terms of how it is backed, which has contributed to a feeling of insecurity.

Also Read: What is the metaverse? The popular fancy term explained

Investing and trading in exchanges can be done with both USDT and USDC. Due to their support for different blockchains, you will need to determine which stablecoin you want to buy based on available trading pairs.

There is no one right answer to the question of whether USDC or USDT should be used.

Holding USDC or USDT only exposes you to the risk of losing your funds if the company backing the stablecoin goes bankrupt.

While Tether (USDT) is one of the earliest stable coins (launched in 2014), it appears to have lied about its dollar reserves, or at least has become stretched in recent years, forcing it to break from its original structure. Up until recently, Tether maintained a reserve of real dollars for every digital dollar it created.

Afterwards, in 2019, they admitted that this was not true, and revealed that they only covered 74% of their coins, and the vast majority of that was tied to debt (only 3.9% of their reserves are in cash).

This project is in a very precarious position due to Tether refusing multiple requests to audit its reserves.
After a 22-month investigation, the New York Attorney General concluded: “Tether’s claims of always being backed by dollars were false.” Tether agreed to pay $18.5 million as part of a settlement.

The crypto industry is based on the principle of decentralization. USDC, however, is centralized. Whenever they want, Centre (nomen omen), the consortium that is responsible for USDC, can freeze anyone’s USDC assets. In response to a law enforcement request, they blacklisted an address and froze $100,000 in USDC on it in 2020. It was commendable that assets were frozen in this case, but there is nothing stopping Centre from freezing assets in more controversial circumstances.

There are fewer trading pairs and blockchains than Tether

USDC announced in June 2021 that it wants to expand to 10 more blockchains in the near future . But as of now, it’s present on 5 blockchains (Ethereum, Algorand, Solana, Stellar and Tron) whereas USDT, its main competitor, is available on 8 blockchains.

Comparatively, USDC offers even fewer trading pairs than USDT. It is rare to find a coin that isn’t paired with USDT, while USDC allows you to buy only the most popular coins.

In the past, Circle claimed that all USD coins are backed 1:1 against US dollars (cash). This no longer holds true. USDC is being praised for being more transparent than Tether and having a better, more reliable reserve composition, yet Tether was completely nontransparent and lied about its reserves just until recently, so it’s hard to look bad when compared to it.

There isn’t much transparency in Circle. In particular, they don’t disclose too much information about funds referred to as “approved investments”. The risks of these investments aren’t disclosed. USADC is licensed in almost every state in the country. Circle can invest in anything it wants under the license of one of those states if it operates under the license from one of those states.

Additionally, if you compare USDC’s breakdowns to, for example, those of banks or other financial institutions, it is obvious that more transparency is needed. Take a look at  JP Morgan’s breakdown

Bringing it all together of USDT vs USDC

The USDC and USDT stablecoins are both pegged to the USD and are suitable for trading and/or investing. USDC is the most liquid stablecoin, but it has a history of controversies over the years, which may have prompted institutions to choose USDC over USDT.

I would end this article with the popular Crypto saying. #DYOR