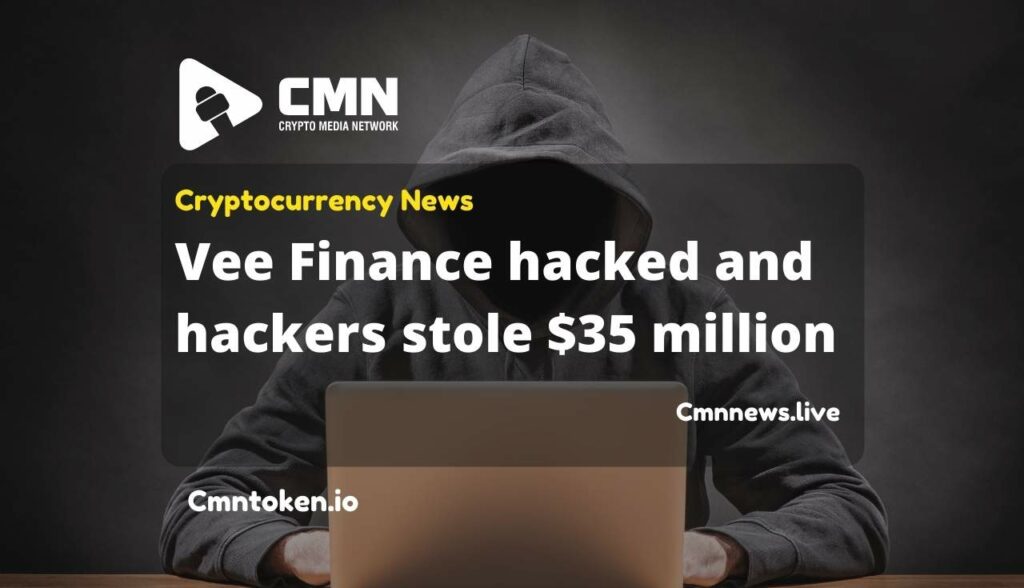 Vee finance was hacked and nearly 35 Million USD was stolen by the hackers. This platform allows a bridge between blockchains through its cross-chain lending capabilities. Users will be able to receive transactions at lightning speeds and with low transaction fees on the platform, as it is built on the Avalanche blockchain.

“We are taking and handling this incident seriously and will do our best to protect the interests of VEE Finance users,” the team behind Vee Finance said in a statement.

Vee Finance announced that deposits on the platform surpassed $300 million just a few days prior to the hack report. As a result of the security breach, the price of VEE has fallen by 85.2% from its all-time high of $0.85 on Saturday to $0.12.

The company is offering a number of incentives in exchange for funds in order to entice the attacker to return funds. These include a bug bounty, which is a monetary reward given to developers who uncover bugs in code.

Attackers targeted a currently active contract and did not target the remaining assets of the lending platform, including USDT.e USDC.e and DAI.e stable coins. Platform customers can take comfort from this. Without much information, all transactions were suspended.

ALSO READ : Crypto companies listed among financial pyramids by the Bank of Russia

A security measure has indeed been taken to suspend exchanges and transactions. However, there has been no announcement of a date for resuming transactions.

Hackers are offered a bug bounty by Vee Finance for returning stolen funds.

During this month, Avalanche has been the victim of two attacks. Zabu Finance, a platform based on Avalanche’s DeFi protocol, lost $3.2 million earlier this month in what’s believed to be the first major attack on the Avalanche blockchain.

In a statement, the company said it has contacted the hacker and is trying to negotiate a solution with them. It works with blockchains including Avalanche and Chainlink to create DeFi applications.

VEE Finance located the address, suspended it, and had stopped the deposits and borrowings. New orders were not allowed, it said. All pending orders had been suspended. Nevertheless, its stablecoin section remained intact and users can still withdraw money.

In a recent report and tweet, it was alleged that the DeFi100 crypto project scammed investors out of $32 million (roughly Rs. 233 crore). As of now, the project has denied the claims, though some doubt remains. Following a rather distasteful statement posted on their website on Sunday, reports of the project’s leaders running away with the money began circulating. “We scammed you guys, and you can’t do **** about it,” read the message on the DeFi100 website. After this, DeFi100 clarified the message was put on their website by hackers. The hackers have since taken it down.

Stay safe from Fake News around the Crypto Space because these fake news literally cost people around Millions of Dollars.

Best Reliable Crypto Websites
Coindesk: CoinDesk was launched in May 2013. CoinDesk provides news and articles, in addition to recordings, instructive materials, bulletins, and event inclusions. The CoinDesk brand is considered an innovator in blockchain and digital currency news. The fact that it holds the Annual Consensus Summit every May reinforces this standing.

Cointelegraph : CoinTelegraph is an exceptionally respected site that was established in 2013. The site offers news on digital currency, blockchain, business, innovation, and administrative issues. Market investigation and well-qualified assessment are additionally given. The site additionally offers a considerable segment of instructive articles. The creators and supervisory group are worldwide appropriated, giving assessment that is global in scope.

NewsBTC : NewsBTC gives Bitcoin news, specialized investigation, and market conjectures for Bitcoin and altcoins. The site has been in presence since October 2013. The site began instructing perusers about Bitcoin and its potential impacts on the conventional monetary framework however have developed to incorporate an entire cluster of computerized media inclusion of altcoins, crowdfunding, administrative news, and the intermingling of innovations like the blockchain, IoT, AI, and that’s only the tip of the iceberg.

What is Vee Finance?

The mission of the project is to reduce barriers for traditional users to participate in DeFi and optimize the efficiency of global asset allocation.