What is Djed? How does it work? Explained | Cardano COTI partnership 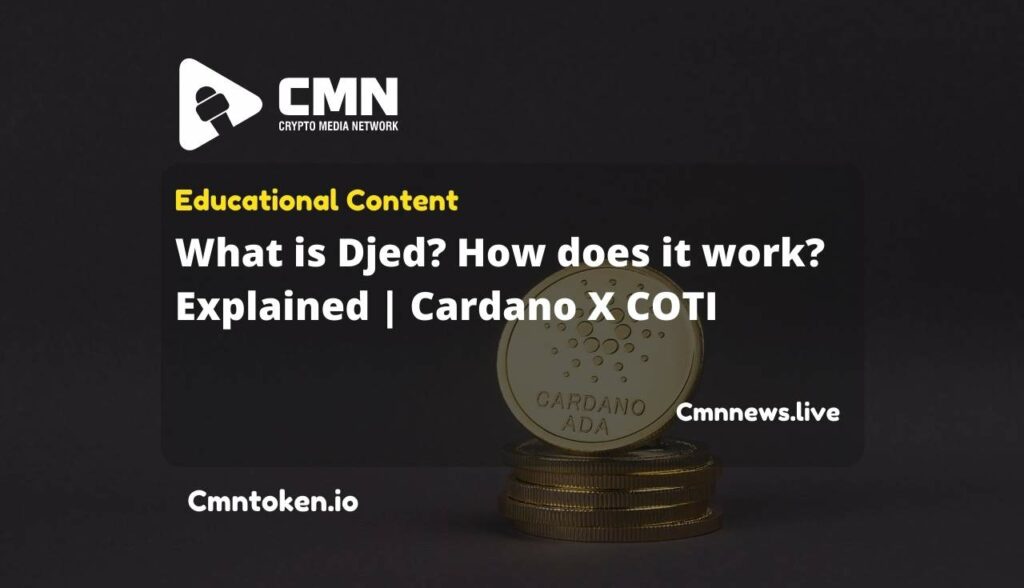 What is Djed? How does it work? Explained | Cardano COTI partnership - CMN

Djed is a protocol for algorithmically buying and selling stablecoin that behaves like an autonomous bank, with its prices pegged to a target price. Banks maintain volatile cryptocurrencies as reserves of cryptocurrency-backed loans. Reserves are used as a source of stablecoins to buy from sellers.

Additionally, stablecoin sales revenue is deposited in the reserve. Besides stablecoins, the bank also trades reservecoins in order to capitalize itself and maintain a reserve ratio significantly greater than one. To the best of our knowledge, this is the first stable coin protocol where stability claims are precisely and mathematically stated and proven.

Djed will be entering an already busy stablecoin marketplace in which Tether and USD Coin are most prominent, but Djed is set to be the only stablecoin on the Cardano network.

The project will be based on an algorithmic design that uses smart contracts to maintain price stabilisation. It will provide decentralised finance tools, make transaction costs more reliable, and reduce volatile transaction fees that can arise on the network.

IOHK says Djed will operate by maintaining a reserve of base coins, although it has not been made clear which coins these will be.

According to Djed’s research paper, the authors believe it will be the first stablecoin “where

stability claims are precisely and mathematically stated and proven”. Furthermore, the proofs will be verified twice using two separate techniques.

However, the announcement does not seem to have been able to reduce the month-long downward trend for Cardano. Its market value peaked at just over $3 in early September but it has seen a steady decline since then falling close to $2.

“The Djed stablecoin could be a game-changer in the crypto space, appealing to an entirely new audience at a time when the industry is already experiencing astronomical growth,” declared Hoskinson.

The COTI development team believes that stablecoins are a ‘killer app’ that will be adopted by a large number of crypto users for settling payments and covering fees. The company was the first recipient of equity investment from the cFund for Cardano developments.

Shahaf Bar-Geffen, chief executive of COTI Group, said: ‘The stablecoin ecosystem has matured tremendously over the past few years. Blockchain participants are using stablecoins to engage in everyday transactions because they allow monetary value to be exchanged in a seamless manner, regardless of the sender and recipient’s location.

‘I believe that adding the Djed stablecoin to the Cardano blockchain will significantly improve how transactions are settled on the platform.’

IO Global chief executive Charles Hoskinson said: ‘The Djed stablecoin could be a game-changer in the crypto space, appealing to an entirely new audience at a time when the industry is already experiencing astronomical growth. Djed shares our commitment to formal verification, proving a robust method of combating price volatility of crypto markets.

ALSO READ : A discussion of cryptocurrency as a currency in real-world situations.

COTI markets itself as the first enterprise-grade fintech platform that empowers organizations to build their own payment solutions as well as digitize any currency to save time as well as money.

COTI is one of the world’s first blockchain protocols that is optimized for decentralized payments and designed for use by merchants, governments, payment DApps and stablecoin issuers.

COTI Pay is the first application. It describes itself as a fully encompassing finance on the blockchain. The COTI Group launched in March of 2017, while the Staking Platform Launched on Jan. 1, 2020.

It is an ecosystem that is designed specifically to meet all of the challenges associated with traditional finance, including latency, fees, global inclusion and risks. This is done through the introduction of the DAG-based protocol as well as infrastructure that is completely scalable, private, inclusive and fast.